John Godey’s The Taking of Pelham 123 was an influence on Baptism only in as much as I knew that if I was going to create a story about a hijack on the London Underground, there were going to be comparisons. But I also knew that the similarities would be superficial because – while I had always loved the 1974 film adaptation starring Walter Matthau – the story that I wanted to create was very different from the story of a gang of criminals who wanted to hold New York City to ransom to the tune of “one million dollars”.

Baptism is very much a London story and one that is decidedly post 9/11 – and post 7/7 for that matter too. It was inspired in part by my experience of being trapped on the Tube train behind the one in which Jean Charles de Menezes was mistaken for a terrorist and shot by armed police officers in 2005, a couple of weeks after the 7/7 bombings, and the day after another four bombers had failed to detonate their explosives on Tube trains. Sitting there in a crowded Tube carriage for nearly an hour as the driver of the train tried to keep the passengers calm, while clearly nervous himself at what might be taking place further up the tunnel, was something that I knew I would want to write about at some stage. Perhaps subconsciously influenced by watching The Taking of Pelham 123 as a child, I had always thought how easy it would be to hijack a London Tube train. But why would anyone want to? The rail network beneath London is housed in some of the deepest narrowest railway tunnels in the world. Escape would be impossible. Wouldn’t it?

At the time that I ended up trapped on that Tube train in 2005, I was already writing a story featuring hostage negotiator, Ed Mallory. It wasn’t a bad story but I knew that a hostage crisis on the London Underground was going to be an altogether more scary proposition, playing on people’s primal fears and claustrophobia. So I set about writing Baptism. It took a while. The characters and plot changed quite a few times before the final draft was complete. And now I’m pleased to see the book published in the US and hope that American readers will enjoy a story that takes them to a dark nerve-jangling place deep beneath the streets of London and keeps them guessing right up until the final page.

Baptism is published in hardback by Quercus USA.

“The time has come to stop the bad people from winning.” 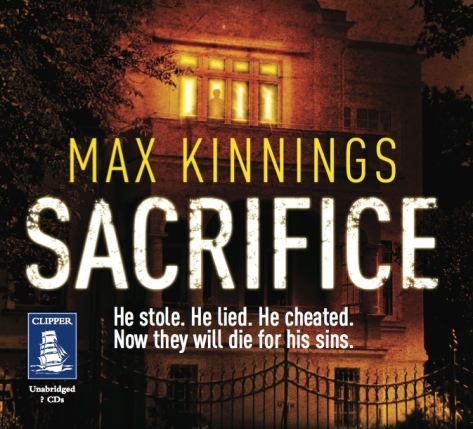 Sacrifice is released this month as a 9 x CD box set or audio download by Clipper/WF Howes. The story is read by actor and voice artist David Bauckham and is available to buy here.

You wait for a Sacrifice review and then two come along at the same time. So I thought I’d share them with you. The first is by The Book Geek:    http://bookgeeksays.blogspot.co.uk/.

The second is by Sophie Scott on her Literary Consort blog:      http://www.literaryconsort.com/2/post/2014/01/an-english-bankers-mansion-is-his-fortress-right.html.

And they both like it! The comment that I have heard most from those who have read Sacrifice so far is that they prefer it to Baptism. If Sacrifice is a better read then maybe it’s something to do with me getting better at writing this style of novel. Baptism took five years – off and on – while Sacrifice was written in a sustained burst of activity over about nine months. Maybe this challenges the wisdom that spending a long time on a book will make it better. I’ve always written my best work – or best in my opinion – while facing a fast-approaching deadline. Then again, not everyone feels a compulsion to work harder when faced with a deadline; Douglas Adams said of his love of deadlines: “I like the whooshing sound they make as they fly by.”

The US version of Baptism which is released on February 4th has received a prestigious “starred review” in the US book selling bible, Publishers Weekly. A single red star is awarded to “books of exceptional merit”. This bodes very well for the forthcoming US publication. 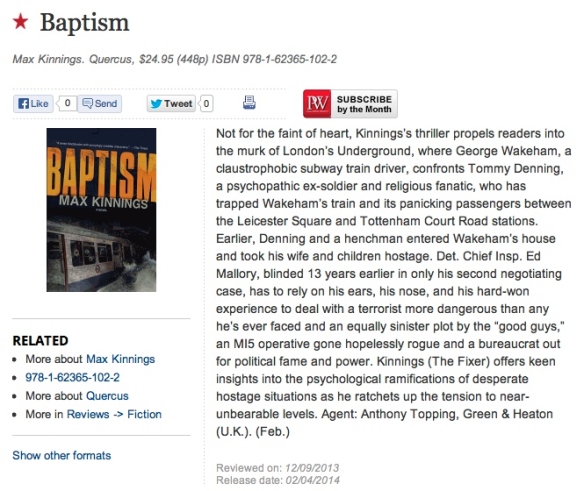 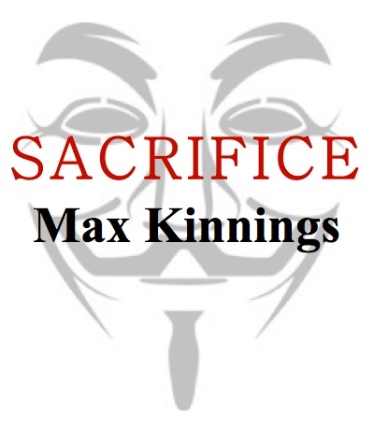 I’m very proud to announce the publication of my new novel, SACRIFICE, which is the second thriller to feature blind hostage negotiator, Ed Mallory. The book is published by Quercus Books in paperback and ebook, and the opening chapters can be viewed here (via Amazon where you can of course buy a copy!).

Initial reactions from friends and family are extremely positive which I’m pleased about but the true litmus test is out there in the badlands of the “real world”. As with BAPTISM which is now published in Germany via Goldmann/Random House and rereleased by Quercus, a high concept thriller plot rooted in contemporary concerns is combined with believable characters to create a fast-paced, thrilling ride that will appeal to a broad readership. That’s the intention anyway. I won’t be the judge of whether I’ve succeeded in that endeavour. Let’s just say that those readers who enjoyed BAPTISM shouldn’t be disappointed. I look forward to hearing readers’ reactions to the story, further details of which are below.

Disgraced hedge fund manager Graham Poynter hides shamefully in his Belgravia mansion. He lied, he cheated and he stole but the police and legal authorities are the least of his worries. Poynter and his family have come to the attention of a new style of hacktivist. The Adversary – or Advo – believes that non-violence only works up to a point and as Thomas Jefferson said, “Sometimes the tree of liberty must be watered with the blood of patriots and tyrants.” Jefferson might have added, “and bankers”…

Advo intends to make an example of Poynter as a warning to others in the banking industry who might think they can behave as he has done. The only person who stands between Poynter and his grisly destiny is blind hostage negotiator, Ed Mallory, who must negotiate with a faceless adversary who is hell-bent on exacting retribution on a minority which has gone unpunished for too long.

To read the opening to the book and buy online in paperback or ebook formats, please go to:

In November, BAPTISM is re-released by Quercus alongside the follow-up, SACRIFICE, the second novel featuring the blind hostage negotiator, Ed Mallory. To mark this occasion, I would like to make an exclusive offer to members of my Twitter, Facebook, Goodreads and Linkedin networks. If you read BAPTISM and post a reader review on either Goodreads or Amazon, I will send you a personally signed copy of SACRIFICE absolutely free of charge.

All you have to do to take advantage of this offer is direct message me via any of the social networks listed above with a link to the review in question and a postal address for me to forward your free signed book. This is not an attempt to buy good publicity; you’ll get a free copy of Sacrifice regardless of the criticism contained in the review. I’m confident that both books will appeal to crime and thriller readers so please feel free to express yourself as you would writing a review of any novel. The review can be as long or as short as you like.

Please share this with friends or associates who are crime/thriller fans. As a preview of SACRIFICE, the first three chapters of the novel are now available to read here. Any thoughts or comments would be greatly appreciated.

Work continues on the screen adaptation of Baptism. Hoping to bring you some exciting news soon. In the meantime, here’s a short film made by Gareth Gatrell and the Philm Company that goes behind the scenes of the Baptism spec trailer.

On July 9th, I hosted a workshop at the Digital Humanities @ Oxford Summer School 2013. The event’s organiser, Pip Willcox, asked me to speak about “Writing For New Audiences” and I’m extremely grateful to her for allowing me the opportunity to do so. It was an enjoyable experience to step outside my usual comfort zone of writing novels and screenplays, and teaching creative writing at Brunel University. In preparation for the workshop, I set about considering the nature of writing in the digital realm and also the audiences – the end users or consumers – for whom one writes. While the talk was aimed specifically at the audience of arts and humanities academics at the summer school, hopefully it might be of interest to others who write and present their work on the web. You can watch it here: http://podcasts.ox.ac.uk/06writing-new-audiences-video.

Here’s a recent post that I wrote for Lucy V Hay on her excellent blog, Bang2Write. Lucy is a script editor, novelist and organiser of the London Screenwriters’ Festival. Her screenwriting book, WRITING AND SELLING THRILLER SCREENPLAYS  is available from Sept 2013.

On of September 21st and 22nd I’ve been asked to host a Guardian Masterclass in screen adaptation. This comes at an interesting time for me because I’m currently working on an adaptation of my 2012 novel, Baptism, for director, Phil Hawkins. I’ve adapted all of my novels into screenplays. My first novel, Hitman, was also my first film script. I adapted it out of necessity. A producer was interested in making the film of the book and didn’t have enough initial funds to commission a screenwriter. So I thought to myself, how hard can it be? I’d already done the hard part – or so I thought. I’d written the book. There was the story between two nice glossy book covers. All I needed to do was pick and choose the best bits, lash it all together and hey presto – film adaptation. It didn’t quite turn out like that of course. The Hitman project has gone through about five different directors and about double that in terms of producers. There are three distinct versions of the script, each of these having various different drafts. There are numerous treatments and outlines and despite the book being published over thirteen years ago and there being some, only very recent, interest from a producer, the film remains unproduced. However, the experience of adapting Hitman and the next book I published, The Fixer, has provided me with my own personalised eleven year masterclass in screen adaptation and the associated independent film industry.

I have written and co-written quite a few original screenplays. A couple of them have even been produced. I’ve been commissioned by various film, television and digital games companies to develop scripts but, for me, and I think for any writer of fiction who also has aspirations as a screenwriter, there’s something about the adapted screenplay that remains uniquely special.

What I hope to do in this Masterclass is impart everything that I’ve learned over my eleven year screenwriting odyssey and hopefully help students develop their own screen adaptations as well as answer questions – as best I can – regarding the theory and practice of screen adaptation and screenwriting generally. I can also reflect on the problems, pitfalls, disasters and funny moments that have accompanied my own  experiences. I will also be joined by award-winning director/producer, Phil Hawkins, who has his own unique insight and experience of adapting novels for the screen.

For further details of the Masterclass and to book on-line, please go to: http://bit.ly/1862qUC